Most men cannot really understand female sexuality. Either you have close relationships with a woman or have only just met, the ability to spot signs of sexual arousal is crucial in healthy sexual relationships.

There are women who do not even know for themselves whether they are being aroused or not. Not every girl has studied and embraced her sexuality. While different women show different signs of arousal, there are common ways sexual turn-on shows due to similar functioning of brain center responsible for sexuality in humans.

Physiologically, sexual arousal in women is accompanied by increasing of vascular blood flow and consequent swelling of bodily tissues which include vagina, labia and clitoris.

Sexual arouse is affected primarily be release of hormone testosterone; however there are other hormones that are being emitted before and during arousal.

We suggest you put attention to several telltale signs of a condition known as “sexual arousal”.

Related Article : 12 Sex Tips You Have Probably Never Heard Of

Female body is using gradually all kinds of wetting mechanisms when going through turning on to actual sex and reaching orgasm. Bloodflow is increased in genitals and brain gives command to put wet on all the parts that participate in the process of lovemaking. Lips including.

2. Woman starts to give lascivious glances, her pupils get dilated

State of a sexual arousal in women is accompanied by strong fantasies of a heavy sexual content. This content cannot help but permeate whole her body, but, while she can control her vagina for a while, she cannot control her eyes. Increased bloodflow and hormones released makes her pupils wide as is she is being high. In fact, she is! If you want to make sure that this strange pattern in her look is really a desire, lock your eyes with hers. If her eyes are having even more wanton expression – make no mistake, she wants you right now! 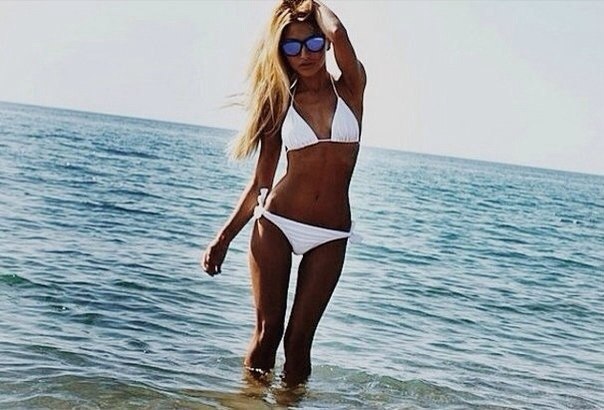 3. Woman suddenly starts using a lot of voluptuous words in their discussion of otherwise ordinary topics

Language is always a two-sided tool for women, apart from being a tool for conveying information, it also serves as a bridge between her emotions and feelings and the outside world. Listen and monitor carefully a verbal content of her talks. Stretch of female imagination that is filled with sexual imagery will start to show in her vocabulary. Even if you are discussing weather on the outside, she may emphasize that she is getting “wet” and “moistened”, she may express her wantonness with sudden commands to a waiter in a restaurant like “I want this naked fruit” or “I have a strong desire to suck this cocktail up”. Social norms do not allow woman to say directly “I want you”, that is why she is using all kinds of tricks to express her sudden surrender to arousal. Talking is probably the easiest way for women to communicate wanton thoughts for you and for her as well. She wants to clarify things for her while analyzing her processes with speech. Do not get offended if woman uses voluptuous words in a negative way. She may say “I feel ugly wet and hate feeling that”. She doesn’t hate it, on the contrary, she probably desperately wants to get laid right now, but her sense of guilt and consequent sense of shame force her to “block” her desires by using negative connotations.

4. Women start to use touch extensively

When women are turned on, they feel desperate need to touch object of her lust. It doesn’t mean she will go directly to your crotch, but even light touches of your hand, your knee, your cheek are telltale signs of her horniness. She will go for the parts of your body that are not often touched by others – like your inner thigh or lower part of your back. What is more, she wants to be touched as well. So do what she wants.

5. When aroused, women are blushing and their heartbeat rate is increased

Blushing and increased heartbeat rate are the consequence of release of hormone adrenaline. Female sympathetic system is reacting both on you as a sexual prey and on her embarrassment on her own horniness.

6. They straighten their backs and slightly spread their legs

During sexual arousal it is typical of women to arch their backs so her breasts and her bottom will be exaggerated as if inviting her partner to get down on her. Notice these signs of her bodily language of desire. If she is straightening like a cat, it’s time to start.

How to increase your response rate from Russian, Ukrainian women?